Published by Admin in News & Press Release · 15 February 2020
Tags: sky, lanterns, rspca, ppc, campaign, personalised
RSPCA is misusing Pay Per Click campaign against sky lanterns
We were very pleased to see our webpage listed first on Google’s organic search, during a routinely keywords search of “Personalised Sky Lanterns", on San Valentine’s day.
However, this happiness to see our webpages ranking first and second positions, by using only SEO techniques, was cut short when we saw a Pay-Per-Click (PPC) ad by RSPCA, above our webpage link.
(Photo: Screenshot of Google search) 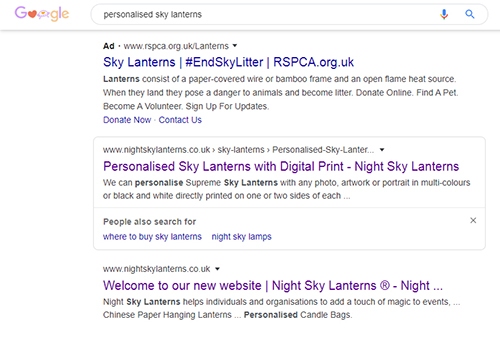 With deepest sadness and condemnation, nobody could ever expect that a respected Charity organisation, such as RSPCA, could adopt such a low marketing strategy to attract donations. It is unjustifiable that a Charity organisation desperate to generate income, rises additional funds by despising not only all reputable suppliers, such Night Sky Lanterns®, but RSPCA is also disregarding the operational study by the Department for Environment, Food & Rural Affairs (DEFRA), which was also fully financed with public money.
Surely some people know that RSPCA was making alleged remarks on sky lanterns, targeted to discourage people and event organisers from using them, but the use of aggressive paid campaign is no longer acceptable. Indeed, RSPCA was claiming that “sky lanterns have a metal ring which pose a danger to animals …”, in a previous campaign.
Anyone who has seen or used Sky lanterns knows that all sky lanterns are made with a bamboo ring, as the wire ring would be too heavy for the lantern to take-off. However, after numerous attempts to inform RSPCA that premium sky lanterns do not have any metal wire/parts, they have recently rectified their camping with “…a paper-covered wire or bamboo frame…”. This is also incorrect and deceptive, unless they simply needed to include the keyword “wire” to discredit indiscriminately all reputable sky lanterns suppliers. (Photo: Cloth wick / fuel cell of Premium Sky Lanterns) 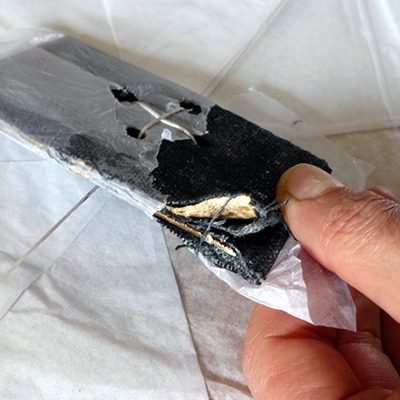 It is inexcusable that RSPCA’s CEO, Chris Shewood, known for being one of the most paid CEO in the Charity sector with his six-figure salary, is authorising his Director of communication to use unproven claims and support staged animals to generate income.
It is embarrassing to see someone of a renowned Charity, such as RSPCA, is using its operandum inappropriately to make money from persecuting and diminishing another reputable businesses’ operandum, no matter what, even if it means making untrue allegations.
Recently, DEFRA confirmed that, “An outright ban of sky lanterns would be disproportionate”.
An outright ban on all farms with animals would be disproportionate, even though a minority of irresponsible people were found to mistreat their livestock. Likewise, it is unconceivable to ban all Vets, just because some careless Vets exploit vulnerable pets’ owners, extorting outrageous amount of money to perform experiments on sorrow animals.
Have said that, it may be very easy for anyone to point a finger at somebody else. Equally, many people would agree that some Charities exploit susceptible people to pay for anything else except for properly execute their mission.
Any further resource deployed on this matter, will not only be a loss of tax payers’ money, but it will also result in a loss for RSPCA and its stakeholders. Undeniably, potential donors who are knowledgeable about sky lanterns and have used sky lanterns responsibly, do not support RSPCA’s campaign to ban sky lanterns. Once again, RSPCA is in jeopardy of losing further public’s confidence, due to their lack of credibility shown by their spending behaviour and using alleged claims for their scaremongering propaganda against sky lanterns.
Last but not least, it is essential to clarify that a slogan #EndSkyLitter against sky lanterns, shows deep lack of knowledge of “Litter” definition. In fact, “release”, “launch”, “set free”, “take-off”, “landing”, none of these words are mentioned within the definition of Litter. Therefore, littering offence cannot be applied to sky lanterns, fireworks and gas emissions from machines and animals.
Post sources:

7 comments
Average Vote: 171.0/5
Gino Soccio
You are crazy man, you smoke too much grass probably, it's not like you can safely release naked flame that can spread over places, where do you want this to be done in London? You crazy. I think you are also very dumb. Better maybe do something harmless like sell oil from some other country or maybe do something useful like gardening or maybe get into antiques.
ANGRY
Totally agree with comments of MAD. Pathetic! nobody wants these Lanterns whatever they are like. Stop acting like a complete idiot trying to persuade people. We don't want your sky lanterns, FINAL.
Sarà de Mandeville
Idiot! The RSPCA are highly respected and I’d rather listen to them than you.
Anna
They're not misusing it, they're using it exactly as intended.
The RSPCAs funding is used for all their work, including campaigning to change laws and regulations.
You're just mad because their campaign is listed above your advert.

It's not the RSPCA destroying your business. It's you.

MAD
What a pathetic blog you’ve written here. You are disgusting at every level that you can’t see that so many people are against the use of your ridiculous products. Turning it round to attack the RSPCA instead of actually taking a look at yourselves and what you are doing and selling. Take a good hard look at yourselves!!! You must be totally brain-washed to think that putting a naked flame into the air is safe, whatever the product is made of. The most despicable thing is actually the trading standards responsive, which obviously came through a hefty bung by your company.
You’ll be shut down by the end of the year, I’m making it my mission, as are thousands of others, so think of another (environmentally friendly!!) business plan quick!
By the way, you being top on google is due to everyone being incensed by your campaign and your products clicking through to abuse you NOT to buy your products. Ask yourselves, have sales gone up proportionally with the number of clicks?....I doubt it very much!
How many good reviews have you got in the last few weeks?!?
I am incensed that you continue with any of your “charitable” campaigns and haven’t taken them down! Do the honourable thing, take them down....but you clearly don’t know how to be honourable otherwise you’d have done that already!!!!

Hannah
It’s disgusting you would use their name to promote the absolute crap you sell.

What you’re doing is endangering animals, potentially causing the already overstretched emergency services to have to attend injured people / fires etc and all to line your own pockets.

It’s disgusting you care more for money, than you do for your environment. You should be ashamed.
Sarah
Lanterns burn animals. You seem to be suggesting that it's an acceptable risk, almost as collateral damage. Tell that to my burned horse. How dare you deem that ok?
Recent Posts
Monthly Posts
Categories
Clouds
Promotions News & Press Release
Back to content